This Is Ray Noble

…. from the treasury of Immortal Performances. 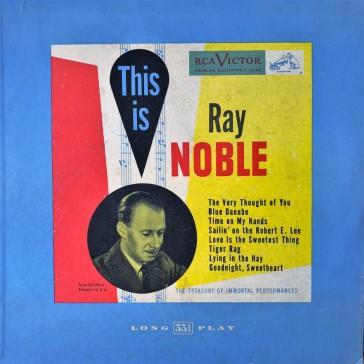 In the early thirties, American record  buyers were both surprised and delighted by some very lovely music played by an orchestra with which they were totally un-familiar. With little fanfare, for neither the dance band era nor disc jockeys had yet descended upon us,  the delicate strains of some very lovely songs were introduced via RCA Victor records (some people had heard them earlier on “His Master’s Voice,” the English version of RCA Victor) to first a comparatively few but discerning devotees.

But as more and more of these records were released, more and more people started to notice Ray Noble and his Orchestra. And the more they noticed, the more they began to wonder who this Ray Noble chap was and, at the same time, to marvel at the exquisitely tasteful music that his orchestra played.

Ray Noble, beside being an Englishman, was also a tremendously talented composer and arranger. (This set contains three of his best-known songs: The Very Thought of You, Love Is the Sweetest Thing, and Goodnight Sweetheart.) He was also a pianist, although those delicate piano passages on several of the selections on this record are actually played by his band pianist, a seldom heard of fellow named Harry Jacobson.

The band which made seven of these eight selections (Tiger Rag was recorded by a different outfit, a group of men which Noble bad put together primarily to make a trip to Holland and with which he waxed just a few sides) was not an established orchestra. It was strictly, what is called in the trade, a “studio” outfit, meaning that the musicians held regular jobs with other orchestras but played together under Noble for the express purpose of making recordings. (Ralph Flanagan and Buddy Morrow started recording with studio groups also, switching only to a regular, set personnel when they decided to appear publicly with their orchestra. Noble’s band, though, didn’t perform anywhere except in the recording studio.)

The instrumental line-up included four saxophones, two trumpets, two trombones, three violins, one viola, piano, guitar, bass violin and drums. The singer,. Al Bowlly, who is featured on five oldie tunes, The Very Thought of You, Time on My Hands, Love Is the Sweetest Thing, Lying in the hay and Goodnight Sweetheart, was a very sentimental South African, who along with drummer-manager Bill Harty came to the United States in 1935 with Noble for a brilliant engagement in the Rainbow Room at Radio City in New York. He sang like no other singer; his style was warm and endearing, just like Bowlly himself, and the music world lost a fine artist and a fine fellow when Al was killed during an air raid on London in World War II.

So great was  Noble’s fame and so respected was his work among musicians, that he was able to front a brilliant aggregation when he did come to these shores, an orchestra that was organized for him by the late Glenn Miller, and which included, in addition to Glenn, such famous musicians as Claude Thornhill, Will Bradley, Charlie Spivak, George Van Epps, Bud Freeman, Johnny Mince and Peewee Erwin. Once firmly established here, Ray branched out beyond the dance band field, centring his activities on the West Coast, where he is currently concentrating in radio as a combination orchestra leader and comedian.

All this, of course, would never have been possible, were it not for the wonderful music that he and his English Musicians made during the early thirties, music which is herewith presented as a classic example of good taste and good musicianship within the field of dance orchestras.